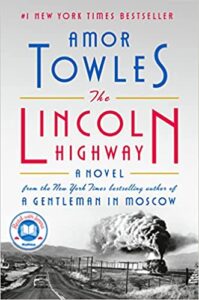 This is a lively, well-crafted tale that keeps the reader engaged with a twisty, fast-moving story line. The four principal characters, all young white men in the early 1950s, are clearly drawn and illuminated. Relevant backstory is provided as the narrative unfolds. It feels epic (576 pages), rambunctious, adventurous, sometimes poignant.

The Lincoln Highway is a smooth ride. The four principal characters are rarely all together in the same scene. The gears shift often – but fluidly. That’s a tribute to the strong characterization: you figure out who these people are early on and recognize them quickly despite getting bounced along.

The story parts are well-fitted, with enough unexpected twists to keep you on your toes. Two of the protagonists in particular are complex characters who wrestle with good and less-good instincts. The other two are naïve and charming in their own ways.

It’s hard to say their personalities evolve or are changed by the story, although their situations are significantly different at the end of the story. The various endings are sometimes unexpected but they fit with the groundwork laid by the author.

The prose is sophisticated, amusing, earnest and insightful. I enjoyed it. But it sounds more like an erudite, mature novelist than any of the young men driving the story, one of whom is about 10.

The novel is realistic. As with most novels, coincidence happens. But it’s credible coincidence. One road bump for me was a 1,300-mile journey by a single motorist in about 18 hours. In an old pickup truck in 1954, when the Interstate system was a twinkle in Eisenhower’s eye and the eponymous Lincoln Highway was a collection of routes that ran through towns and cities, rather than steering around them.

Truth be told, I put this on my reading list because it was a best seller about a road trip on the Lincoln Highway. My as-yet-unsold road trip story, Claudine vs. the Ants, is centered on the stretch of U.S. 50 that runs across the Great Basin from Lake Tahoe to the Nevada-Utah border. It’s called the Loneliest Road in America because of the dearth of traffic, but it’s also considered part of the Lincoln Highway as that’s currently defined. At least by some.

The Lincoln Highway is strongly recommended, especially for the reader leans nostalgic for the 1950s and young guys finding themselves on the road.

One Reply to “Book review: The Lincoln Highway”