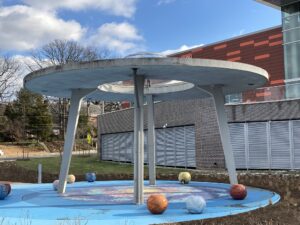 SPACE OUT AT GEORGE JETSON LIBRARY

Once upon a time, Prince George established a public library on the road to Adelphi. As it was 1964, the prince considered naming it for John F. Kennedy. Instead, it was called the Hyattsville Branch of the Prince

George’s Memorial Library and become famous for its flying-saucer canopy at the main entrance.

According to the Maryland Historical Trust, the saucer was meant the draw the attention of the passing motorist and was not intended to be “programmatic.” Examples of programmatic flourishes on commercial buildings include large buckets of chicken, doughnuts, cowboys and so forth. The observer can intuit from those signs that chicken, doughnuts and western boots are available in those establishments.

The library did not offer artifacts from interstellar travel. However, experts characterize the saucer is “a graceful and satisfying element” that echoes an important architectural motif of the early 1960s, as seen in the works of Eero Saarinen, a famous architect who had nothing to do with the library.

However, our saucer landed at a time when people were driving around in some space-age cars.

In recent years, Prince George has undertaken a massive rebuild of the library that is nearing completion. The flying saucer was not abandoned, but it had to be moved. It didn’t fit with the chic look of the rebuild.

Our monument to the space age is now located at the back of the library, along Toledo Ave, next to a garage entrance that has no recognizable motif. While no longer in the spotlight, the saucer now commands attention a the center of a ring of 11 objects meant to signify planets in varying patterns and colors. There is also a cosmic swirl of color on the ground beneath the dome.

In addition to being jazzed up, it is no longer squeezed into the juncture of two parts of the building.

Imagine yourself in a Rodin-like pose upon the red planet. You muse that our flying saucer may be literal, the sign of a vehicle of knowledge. Passing motorists may see it as a form of broader transport than their primitive automobile. The future beckons through the saucer’s dome as we wander among the stacks.

“We set sail on this new sea because there is knowledge to be gained,” President Kennedy said, thinking of the moon.

The first public libraries in the county of Prince George were bookmobiles.