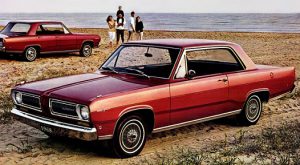 Speedy makes his first “I Flick Butts” bumper sticker and places it on a 1967 Plymouth Valiant.

At a red light, we pulled alongside a new Plymouth Valiant. A woman about my mother’s age was smoking a cigarette. She blew the smoke out the window. Her Valiant was a two-door coupe in luminescent aquamarine, a boxy trunk with suggestive, miniature fins. The woman didn’t look like a thrower, but you never know.

“Let’s see where this goes,” my father said. When the light changed, he hesitated long enough for the Valiant to pull ahead of us. The driver seemed to be done with her smoke; her right shoulder dipped slightly as though she might have been grinding out the burning end in the ashtray.

As we were slipping in behind her, the cigarette came flying out the window. She appeared to toss it with her right hand, across her body.

She pulled into a shopping center and wheeled toward the supermarket. We followed her, which was beginning to feel a little less creepy, and parked a few spaces away. She gathered up her things and pulled down the visor to check her face before she opened the door and slid outside. She walked around the back of her car and toward the market.

My father slowly pulled out of our parking spot and rolled behind the Plymouth and then stopped. He tore off a length of tape about 16 inches long and stretched it temporarily across the steering wheel, uncapped the marker with his teeth, and inscribed “I FLICK BUTTS” on the tape.

“Slide over and take the wheel,” he told me. “But don’t start driving until I say so.”

He pushed the gearshift into park and got out of the car, closing the door softly behind him. As I pulled myself behind the steering wheel, he ducked below sea level in the parking lot, into the underwater of tires and side panels and grills below the windowed auto world where the top third of motoring humanity is visible. I watched him carefully place and smooth his homemade bumper sticker on the Plymouth.

He stood up and turned to me. “Go ahead. I’ll come around and get in the other side.” He was a little breathless. I wondered who this man was.