She is already done with me. I climb down the steep steps to the main deck and maneuver along the leeward promenade toward the bow just as we smash into the ice again and make about 10 or 20 yards before we have to back up, rev the engines and ram forward again. 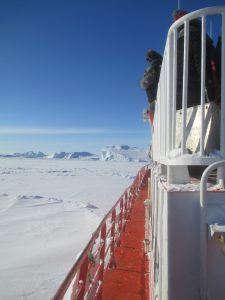 There is a small but hearty band of us forward on the main deck, intent on our progress, pounding away at the ice regardless of how cold the seawater had to get to freeze.

After a couple of cycles of stall-backup-ram ahead, I see us as an American football team with no passing game. We have to rely simple-mindedly on our offensive line and running backs to wear down the ice that separates us from that channel of open water near the iceberg.

At the moment, we are 100 yards away. But we are notching first downs, moving forward in eight-, 19- and 26-yard gulps and all of us on the bow are convinced this is just a matter of time.

The chains keep moving. I turn to the fellow on my right and ask him, ‘Is it one or two more?’ He says one, but I think it’s two. And sure enough, we get about 12 yards from the goal line when the defense stiffens and stops our forward progress. We huddle again on second down and of course every man and woman among us knows the play by then.

I like to think the captain revved it up a little more, but he probably didn’t. Or that we on the offensive line drove more resolutely into the wilting defense. The ship surges forward, the ice cracking and scattering to the side, plowing toward that clear sea ahead, but losing momentum and then the guards, tackles and tight ends lean into it, our hips thrusting forward, the quarterback helps drive the pile of a dozen or so humans trying to will a multi-ton iceberg ship forward to the promised land, our momentum staggered but not extinguished over those last few feet and then.

We are through. Touchdown. The offensive line turns as one and cheers for the captain. “Ring the bell,” I say, and Lakshmi – I didn’t know she was there – flails away at it and I see Dr. Nashville leaning gleefully over the rail, snapping memories into his camera with abandon.

It is almost anticlimactic, streaming toward the big iceberg in open water, a victory lap after ejaculation, as the rest of the tourists pour up from below to the main deck and the captain throttles down and we drift as close as we can toward the iceberg which is, after all, flipped over and shrunken enough to get out to the open sea. With most of itself hidden underwater.

It looks big out here, but it was bigger before, maybe a year ago when it sheared off the glacier and began its long journey, perhaps to sink a poorly navigated transatlantic vessel. We glide toward her, cameras clicking electronically. 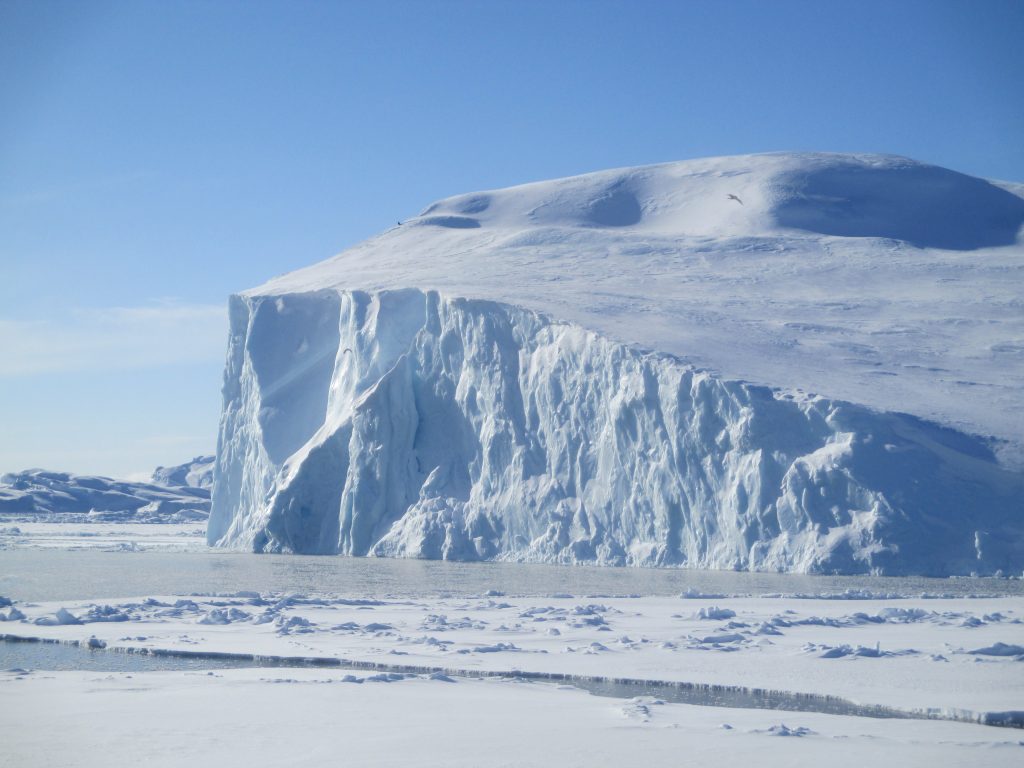 “I cannot promise that we’ll get out to the icebergs because the sea is quite frozen,” the tour  guide says. “But we will try.”

It’s not every day that your boat ride might get cancelled because the sea is frozen. I wait until Beehive chooses one of the two vans. Then I get in the other. Not trying to avoid her, just avoid her in public.

The harbor is only a few blocks away, but we tender tourists must be coddled, I suppose. Plus, it is another opportunity for the locals to show off their disdain for snow-packed, narrow lanes, whipping us around blind curves on threadbare tires.

The harbor, coated in snow, countenances no nonsense. People come here to wrench a living from the sea or wait for supplies to come in when the bay isn’t frozen shut. The guide climbs out of the van, leaving us idling diesel fumes into the cold morning, waiting for the iceberg tour-boat to arrive. 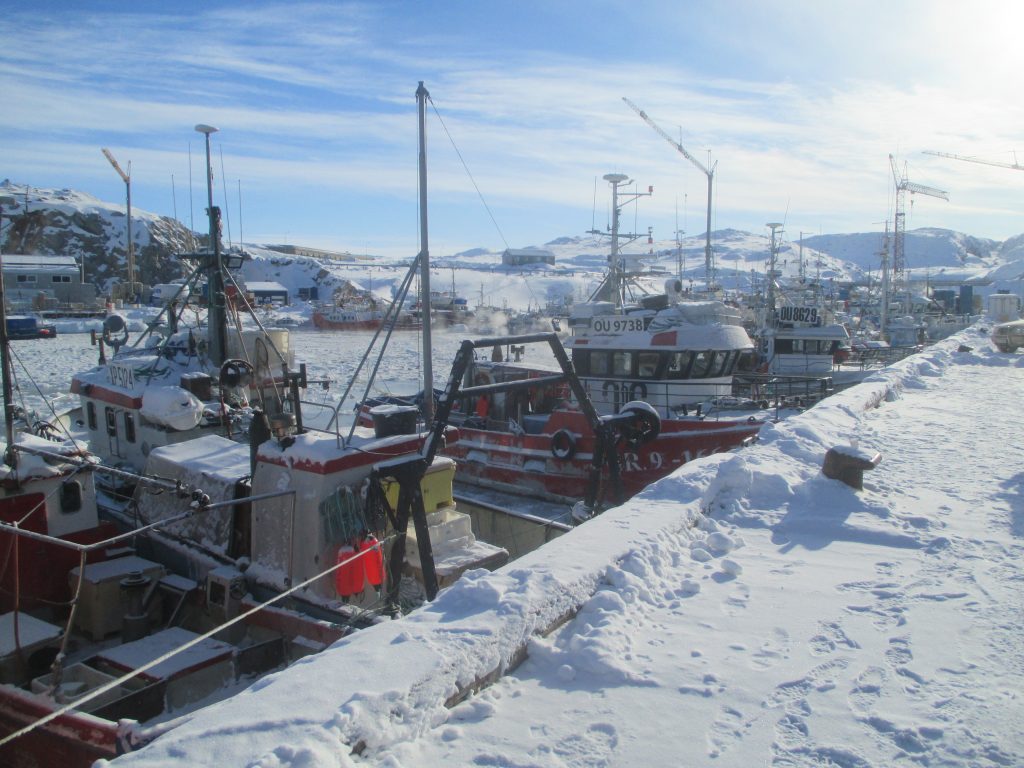 After a little while, it appears, smashing what looks like a puny layer of ice in a channel out in the harbor before angling for a nearby berth that looks ominously frozen. The boat gets sort of close to the pier. The crew maneuver a staircase just over the edge, connecting ship to shore and its stream of tourists eager for icebergs.

It is just the littlest bit dicey navigating the stairs at the bow of the tour ship, and the helpful captain grabs elbows as necessary and guides the revenue to somewhat safe and steady footing on the deck, where we follow ourselves below to a cabin that holds a couple three dozen of people. Benches on either side of tables. I find myself across from the Danish family from the airplane: the distant husband who smokes, handsome wife and teenage son.

The tour guide delivers a mandatory safety lecture. I’ve heard hundreds of these on airplanes and still sometimes listen because, well, you never know. But not so many on watercraft. 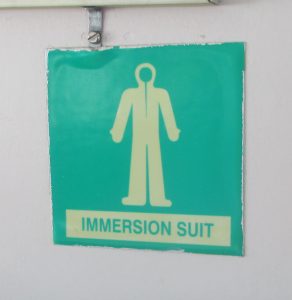 At one point, the tour guide mentions the unlikely event of an emergency and the presence onboard of immersion suits and how we are to crouch – either before or after taking off our boots, I’m not sure about the order – and stand up, whereby we will be magically in the immersion suit that will prevent us from freezing to death in an arctic sea that is, itself, so frozen that we’re not sure we can get this boat out of the harbor, much less anywhere near the icebergs which are, coincidentally, frozen in place.

I want to ask the tour guide to go back over that bit about the immersion suits because I’m still low on sleep and English is probably her third language but I realize this would be too gauche, like raising your hand during the mandatory safety explanation on an aircraft and asking whether it is really necessary to put the oxygen mask over one’s face before helping others, including infants.

From across the table, Mr. Danish asks the tour guide if smoking is allowed on the ship. The guide says no. Looks a little disgusted that he has asked.

Then the iceberg tour ship backs away from the wharf, out into the harbor, a little over three degrees north of the polar circle. Captain points us to sea and shoves it into Drive and the tour guide says we can go aloft. The congregation rises with near unanimity to clamber topside. I notice on my way, following the herd, that Beehive and Lakshmi and a few other souls are staying behind. Again, the feeling that we have been assembled at a place from which there is no escape, notwithstanding the immersion suits.