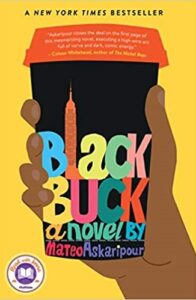 An unambitious young black man is suddenly possessed by the need to succeed in a white-dominated tech start-up, a journey that leads him far from his roots and eventually to a more engaged, sharing life.

Buck isn’t the first-person narrator’s born name. It’s what the white people call him at the tech start-up where he drinks the corporate Kool aid – the whole pitcher. He slowly abandons his roots: an ailing mother, a beloved “uncle,” friends from the street and his life-long girlfriend.

It’s not a pretty process. Askaripour has given us a somewhat charming protagonist who does as much as he can to make us not like him.

Buck is treated badly by white people until he is accepted into the corporate culture which means, you might guess, abandoning all the values he’s brought to the job. A white savior is involved, though an imperfect one, and Buck eventually betrays his trust. In the end, he tries to recycle what he’s learned to level the capitalist playing field.

The novel is a professionally complete mass-market publication. The plot moves relentlessly, almost fast enough to make you accept its less-credible moments. Like the bucket of white paint. Askaripour does a masterful job alternating between “street” language and contemporary corporate-speak. It’s a first-person narrative that goes one step beyond to include separate addresses to the reader in a designated format.

And at several turns the story didn’t ring true and reminded me I was reading a novel. I wasn’t sure why Buck suddenly grabbed for the golden ring and left everything behind, what he’s doing that leads to his great success, or why he starts to come to his senses. Creating a thoroughly credible fictional world is difficult and requires a co-conspirator: the reader. I was there most of the time with Black Buck.