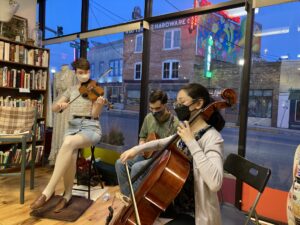 A couple years ago, Robert Harper moved his used-book store from Riverdale into a downtown Hyattsville space shared with the SoHy Co-op. On March 15, My Dead Aunt’s Books launched what Harper intends to be weekly Tuesday-night musical event.

The series opened with Petrichord, a three-piece band specializing in contra-dance music. A blend of traditional and new compositions, several from violinist Colleen Holroyd. In the first set, she was joined by celloist Sophie Chang. Bobby LaRosa brought a mandolin to make a trio in the second set.

It was a blast just to be with live music only a few feet away. Prince George still recommends masking indoors, but who even notices these days. It was clear from the outset that the band enjoyed performing in front of real people. Copious toe-tapping to various reels, jigs and waltzes from Scotland, Ireland, Cape Breton and the DMV. Through the window behind the band, everyday life on Route 1 as the sunset set aglow the brew pub across the street, a full moon emerging from the deepening blue sky.

Most of the pieces were at a gallop, a lively carousel in an old barn. I especially enjoyed it when the pace slowed. A waltz in the first set was transcendental: the vibrations from the strings in My Dead Aunt’s wood floor brought me to a walk along a country road with two old friends. A reel in the second set was contemplative, like listening to a well-educated, three-handed clock that felt good about itself.

During a break, Sophie mentions that she has at times counted wrong and stopped a tune before Colleen did. Had I known this was possible, the dramatic tension would have been great, waiting, unsure, whether they might not all end at the same time. It didn’t happen at the Dead Aunt’s show, but you never know. Bobby mentioned “counting without counting,” which sounded like a subconscious awareness of when the planned number of cycles has taken place. With a caller and live contra dancers, he said, it’s easier to know when to keep track.

Harper has several shows set for coming weeks. And Petrichord is enthusiastic about an April 7 gig at a live contra dance at Glen Echo Park. That’s beyond the realm of Prince George, so get your passports and visa in order. Or just sneak over the border, as The Drift does.

One Reply to “#5 Thing to do in Hyattsville”