Long-time music hunter John Paige explores the continuum of rock music, from old to new. His two-hour show runs every second Monday from 4-6 PM on WOWD 94.3 in Takoma Park. You can fire up an actual FM radio – or put your browser to work. I live inside the station’s narrow broadcast range, and in the shed out back I have an old battery-powered portable radio – the kind with crank to manually charge it in emergencies  – but the fidelity is only slightly better than that of the nearby weed whacker. I use the https.

John and I were for two years matriculated at the same small, liberal-arts college in central Pennsylvania, which, I think has gone out of business. Not sure about that. I got to know John through The Glimpse, a quixotic geyser of cartoonery, prose, bespoke crossword puzzles, an advice column and what-have-you, manifested through the magic of mimeograph. He inherited the project from his brother.

The Glimpse survived John’s transfer after sophomore year and continued to be published for four more semesters. Now, it has a seldom-visited Facebook page. Remarkably, the Glimpse Alumni Association continues to have annual seminars (invitation only). For well over a year during COVID, the trustees met weekly via zoom.

As the saying goes, John has forgotten more about rock music than I ever knew. In any two-hour session, I might recognize a song or two. This week, I thought I’d landed in familiar terrain when John introduced music by The Left Banke. Of course, not Renee or the Pretty Ballerina. Something about things going better with Coke.

There’s not so much curated radio anymore, and John generally explores the paths less-traveled. A refreshing change from the echo chamber of familiar music where I spend most of my listening life.

The Continuum is an easy two hours. You can drift with the current or pretend you’re working on your blog. Highly recommended. 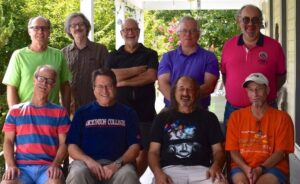