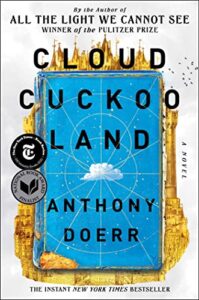 An ancient, partially intact story changes the lives of those who try to preserve it.

Cloud Cuckoo Land is a wonderfully written and constructed novel that carries the reader across centuries. The ticket to ride is a threadbare ancient Greek story, passed along by a captivating cast: a young uneducated woman facing historic gender imprisonment. A deformed Muslim boy cast out from society. A young American man who meets his true love in a British army officer. A boy on the neurodiverse spectrum who only feels comfortable in nature. A girl trapped in a dystopian experiment.

For me, the creation of this cast and the account of their struggles against systemic prejudice is the strongest part of this masterpiece. It’s the kind of book that you’re reluctant to let go because the characters are so affecting and credible, in addition to its far-flung and exotic settings.

The three major story lines fit; they depend on one another to make the novel whole. It takes a little while to see how the thing is constructed, which is part of the mystery this book poses. From then on, it’s a joyride to find out how the lines are tied off.

Two of the three parts are told chronologically, but the big “middle” of the novel bobs back and forth in its timeline. One of the most significant plot turns is revealed up front. The second shoe doesn’t drop for hundreds of pages, but you won’t forget where you were left hanging. Simply delicious storytelling technique.

And all along there is a wonderful scrap of papyrus that tells bits of a story about an ancient farmer who dreamed of something bigger in his life that quickly becomes a comic fable. The transformed farmer basically gets beaten and humiliated by everyone he meets in his supernatural journey.

Cloud Cuckoo Land is a book-lover’s book. Reverential to libraries, to the preservation of the written word and its translation and reinterpretation over the centuries.

This quickly became the #1 novel I’ve read this year, passing ahead of some strong competition.