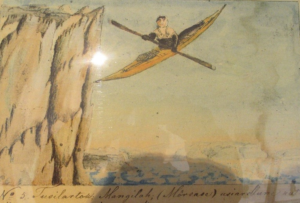 I met Aron of Kangek several years ago at the art museum in Ilulissat, Greenland. Born in 1822, he was a subsistence hunter off the west coast of Greenland, near Nuuk. In 1858 he was stricken by tuberculosis and could no longer go out in his kayak to hunt. In a cramped, primitive house on the island of Kangek, Aron took up art. Watercolor, woodcuts, drawings. He was aided in his work by Hinrich Rink, the Danish administrator for Greenland.

Tuberculosis killed Aron in 1869. He left behind about 345 known works, including 250 watercolors, many of them depicting scenes from pre-literate Greenland-Inuit legends. The compositions were given to Rink, who was compiling an oral history of the native people in a series of bound books. Rink’s widow gave them to a Danish museum, where they remained for a long time. The Ilulissat exhibition in 2018 was homecoming, their first showing in Greenland.

In the museum, I was drawn to an image of a native hunter in a kayak floating in air near a cliff. [The photo posted here features a reflection from my camera flash and a shadow cast by either my dense head or the camera itself.]

Later, I found myself writing a novella-that-became-a-screenplay that takes place in Ilulissat. The floating-kayaker image seemed to me to fit with an ancient Greenlander tale about an old bachelor who didn’t like singing. I mashed the two together and came up with a dream sequence for my project.

Just recently, I learned that the floating kayaker was an historical figure named Tusilartoq. According to Aron’s story, he was out hunting in his kayak when he was lifted from the sea by two seagulls. The gulls suddenly acquire  white dresses and the wings of angels. Tusilartoq rubs his eyes to make sure he’s seeing what he’s seeing, but there is seal blood on his hands. It ends his vision and he descends to sea.

This has been interpreted as a symbolic representation of the psychological tension in the transition from an indigenous belief system to Christianity, which the Danes exported to Greenland. Church records show Tusilartoq was baptized in 1756, though he might not have actually converted.

Tusilartoq had issues. He brutally maimed his wife in a gruesome manner because she couldn’t make their infant son stop crying. This led her to suicide, which led to a blood feud and a killing spree by Tusilartoq. Not exactly the likable chap in the story of The Old Bachelor.