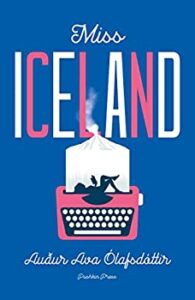 A young Icelandic writer stays true to her purpose in a world that wants her to be something else.

There is a lot to like about this novel. I was drawn to its simple storytelling style that accomplishes so much with relatively little. This chapter start, for example:

A tremendous downpour and storm have broken out and there are few customers in the dining room. Then I spot him standing at the door with his duffel bag and I know he’s saying goodbye.”

Another writer might draw this out, but Olafsdottir’s sparing prose delivers the emotional impact without great expansion. The story is told in short chapters that are typically just one scene. There’s little tap-dancing to link the parts together because it isn’t necessary.

And there are wonderful connections among the four principal characters, each facing separate but parallel challenges. Particularly in the similarity of the resolutions. A satisfying, credible conclusion that leaves plenty for the reader to conjure.

I had this on my bookshelf for over a year, saving it for when I got to the Iceland section of the novel I’m working on.  It was useful in helping to recreate the atmosphere in my head: the main character comes from places where my story takes place. It’s from a similar era. But it was also a great read from a voice new to me and a place we don’t often hear from.

Icelandic writers have about as bleak a prospect as anyone. Though appreciation of literature is remarkably strong in their culture, it’s a small country (366,000) with a language that’s not spoken anywhere else.  Nobody makes money writing in Icelandic. Hardly anyone does in English.

The Washington Post recently published an article about Thomas Savage, who wrote the novel that was the basis for the film The Power of the Dog. The book sold fewer than 1,000 copies when it was published, and the rest of his work received little attention: most of the titles are out of print. Don’t get me wrong: it’s a good movie. Bet you $1 it isn’t better than the novel.