The sign of two fishes scored its first ZodiOlympic wins with two golds and a silver in the second day of competition. 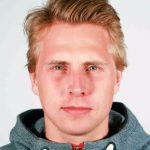 Biathaloner Amd Peiffer and X-countryman Simen Krueger won gold for the Pisces, which tied with Leo for the top score in weighted points for the day.

Their heroic victories put the Pisces — also the sign of the ZodiOlympics founder and chief statistician — in a three-way tie for fith place on a cumulative basis. 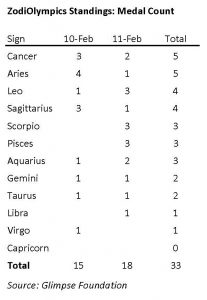 Cancer and Aires are tied for first with five total medals after two days.

On a metallurgically-weighted basis, Cancer (11) and Leo (10) are at the top of the heap.

The ZodiOlympics tracks medal wins based on the birthday of the olympians. It’s provided as a free service by the Glimpse Foundation.