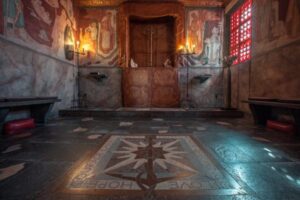 I made two short trips to Newport, RI, for field research. A rainy weekend a couple Januarys ago that was a useful, soggy introduction to the town. I went again last summer better prepared with a list of specific things I wanted to see and do.

The Newport Public Library was on the list. I wanted to read copies of the local newspaper that were published during the timeframe of the novel: summer 2009. Back issues of the Newport Daily News are in the library database, but you can’t access them remotely unless you have a library card and you can’t get a library card unless you live in Newport.

In the library, they set me up with guest credentials that, unfortunately, expired after 60 minutes, so I had to keep going back to the reference desk to get a new secret code. Another bummer was the fact that the section of the library where most of the stacks were was being re-carpeted and was closed to the public. Therefore, no serendipitous discoveries while browsing.

As usual, I found more details about what was going in Newport than I could ever use. There was a film festival, but the famous Jazz/Folk festival hadn’t been held there for a few years. Remnants of indigenous people were considering bidding on real estate the U.S. Navy was giving up. Trinity Church, the landmark Episcopalian church in the historic district, was celebrating the 90th anniversary of the Seaman’s Church Institute, which it established in 1919. It didn’t seem like anything I could use, but I made a note anyway.

Next day, I’m walking around the Newport waterfront looking for buildings that could be the model for a warehouse that my protagonist owns. I notice signage for Seaman’s Church Institute on the side of a building and there is a café on the ground floor and I drink a lot of coffee. Upstairs, I find the Chapel of the Sea, a small room with a lot of marble and a series of paintings: “a visual homage to Christian saints associated with the sea.” Sat for a while, thinking about Italy.

Still had no idea of how this could be in the novel. Some weeks later in the home office, the manuscript tells me that Marie, one of my characters who was walking along the Newport waterfront, could be enriched by a minor,  accidental religious experience. Voila.