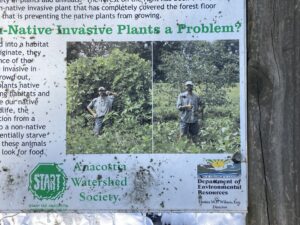 Steve used to work for a local river. As part of his job, he posed for before-and-after pictures regarding the removal of invasive plants. A billboard was installed near a trailhead in what is now known as Driscoll Park. Steve votes in favor of removing invasive plants.

Some time ago, Steve and his son David went canoe camping with other dads and sons on a river that he didn’t work for. The group stopped to explore a cave, found some bats, and returned to their canoes. Except Steve. We waited some time before Steve’s head and shoulders emerged from a small opening in the rock face well above the entrance to the cave. For this and other adventurous behavior, he was christened Mayor of West Virginia.

Steve hasn’t worked for the river for quite a while; he now works for trees. But his legacy lives on in this aging billboard, grinning firm in his conviction into the ravages of wind and rain and sun. Even snow.