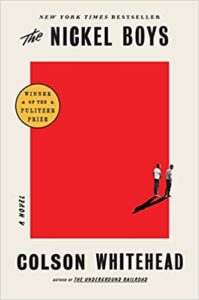 A nuanced portrait of a young Black man’s survival in racist America.

This is a compelling, timely story about a Black boy unjustly swept into a reform school that is worse than it appears on the surface. Elwood, the protagonist, is clearly drawn as an innocent youth who wants to advance in life through hard work and education.

As a reader, you get the sense early that Elwood is going to know hard times, and the sudden turn that lands him jail doesn’t come as a surprise: you’ve been waiting for it. When he arrives at the institution, his situation worsens beyond his own expectation, but the reader can sense what’s coming. A nice bit of dissonance in that. A plot turn opens up the possibility for things to start going his way, and there are more setbacks for Elwood and other characters that keep the story rolling until we come to the first resolution.

The narrator has fun telling the story and allows himself some gallows humor and nuanced observations about what’s going on. It’s a quick, lively read with patterns of long and short sentences. There’s a fatalism about Elwood’s prospects, an acceptance that he, like other young Black men, will get uniformly screwed by the system and yet persist. It is a persistent reminder about racism for privileged readers.

There is a clever story twist at the end that wasn’t apparent to me until it was revealed. This brought the narrative together with a kind of inevitability, and it also made more sense of its structure.

This is one of those novels that starts with a prologue that’s more like an epilogue. The narrative switches back and forth a bit toward the end. You get used to it, but it’s never clear to me whether this actually makes the read better than just starting at the beginning and moving to the end.

The story bogged down in description at times, i.e., when Elwood arrives at the reformatory, we get a detailed account of the layout. Not sure if the narrator could not have taken us closer to his protagonist’s thinking.

This is among the best novels I’ve read in the past year: a journey over somewhat familiar terrain that was well worth my investment. It was significantly more credible to me than the other coming-of-age story about a young Black man that I read earlier this year.