I begin to melt in the soul of the minivan whose ageless heater stirs decades of cramped adventurers. A bouncy ride back to the outfitter’s store, I weigh my options for dinner. Unsolicited, Lakshmi, the Hindu woman, tells me she’s heard the Kangia Café is good. It is across the street.

So, I find myself having supper with her. Locals speaking Greenlandic at the few tables. We claim seats at the counter looking onto the street, peeling off some layers to spray around ourselves, building a nest of sorts. I wonder if she’s being nice to be because of something she saw back in the Reykjavik domestic airport.

The Inuit proprietress asks what we want and, glancing at the chalkboard menu, I propose a baguette more because I like the sound of it. Lakshmi says she wants one too. The proprietress is busy with a pipeline of pending orders. We return to the counter.

“I am going to places that my husband said he always wanted to visit,” Lakshmi says. This is a great relief to me as we now have a topic to talk about.

“I don’t know,” she says softly, almost as though she is with him again in her mind. “He never said.”

“One year ago.” I am sure she is remembering him. It’s almost as though he’s there with us. He’s one of those tall, handsome Indians with majesty in his stride and graceful airs, I decide.

“Where else has he taken you.”

Lakshmi then proceeds to tell me about her sexual experience over 30 years of marriage and family vacations and their life in America and the handful of oddball places she’s been since her husband died less than a year ago. The one that sticks in my head is the two of them waking up in a meadow in late spring, cows milling around. A married couple date, after farming off their two children to an obliging neighbor. A concert with college kids at the liberal arts bastion where he taught English lit to America’s future. The Byrds. Eight Miles High and then the meadow. They did it again in the morning before an audience of great, moonish bovine eyes assessing their significance in the universe.

I am spellbound during this reckoning and almost disappointed that the owner-manager of the Kangia Café has summoned us to the counter to choose the ingredients for our baguettes.

It becomes a wonderful little meal. I throw some barbecue chicken into my order, although my what’s left of my family back in Maryland is steering away from meat that doesn’t swim. That’s what vacations and turning points are for, among other things. Lakshmi, true to form, goes strictly vegetarian.

I am encouraged that my Hindu friend also orders a bottle of local beer, which Greenlanders are remarkably good at even after only a relatively short period of time since temperance was no longer the rule of the land. Can’t go wrong brewing or distilling when you start with glacier water.

At a moment when I’m about halfway through my sandwich and I turn to look at the production end of the café and the proprietress glances my way at the same time, I offer a thumbs-up and rub my belly, a satisfied buddha or lesser Inuit idol and she smiles. As the world is relatively small, you can never go wrong thanking the cook.

Lakshmi and I finish our supper perched on stools, watching the traffic, pedestrian and vehicular, out on Ilulissat’s main drag. We drain our beers in quiet and I pay the check. As we put our layers back on, she thanks me without looking, the way a wife would acknowledge a husband. 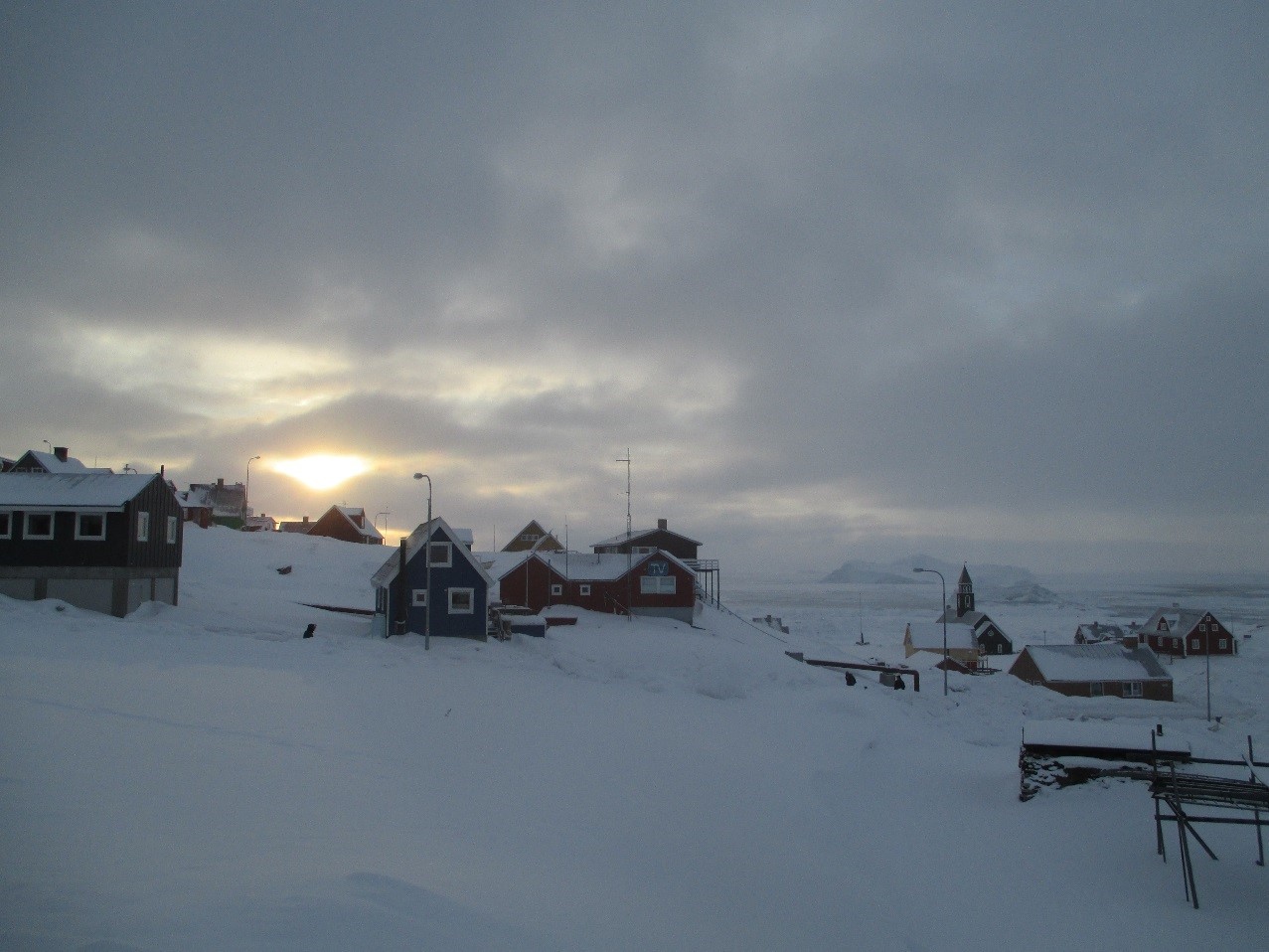