A near-handful of hotels in Ilulissat have dispatched vans to greet us, the recent arrivals from Reykjavik. Energized, I find my way to the Hotel Icefjord driver and identify myself but I must have used too many English things because he just grins and nods his head. I wander away. 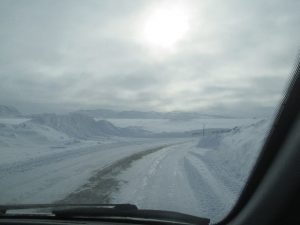 Suddenly there is no one near the Icefjord sign and I realize the Dachshund-size baggage claim belt has already delivered its goods and there is my bag, forlornly waiting for me. Together, we roll outside where the Icefjord van is quickly filling up. It’s down to an Italian couple and me for the last seat in the van.

They can’t be separated, so I take the last seat, next to Hank, who is squeezed into the middle of the front seat. I didn’t notice the make or model, but it’s a ubiquitous three-row van that may have been purchased online from a Mexican auction lot. In Greenland, the main requirement is that it use diesel.

The roads, and everything else, is completely covered by a winter’s worth of snow, compacted to a fun frozen concrete that the drivers in Ilulissat take as a perfectly serviceable driving surface. No need to take corners cautiously, or slow gently to stop signs, or even stop at all, much less give a little leeway to pedestrians, of which there are many. No, sir. If you’re driving on this – no chains, no four-wheel drive and, for all I know, no snow tires – just go ahead and drive. Fast as you think safe.

We bob, we weave and we swerve past the new graveyard and the Hotel Arctic and the frozen harbor and through downtown Ilulissat, turning whimsically here and frantically there and finally over a blind drive into the front entrance of the Hotel Icefjord. As I was the last one on, my bags are the first off. I hustle inside.

Later, on a guided hike to Sermermiut. 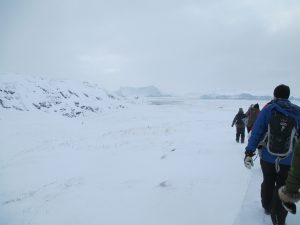 We drive to the starting point of the hike in another rundown minivan that keeps the tourist industry humming in Ilulissat.

The proceedings are in some disarray. The guide indicates that he’ll do the English spiel first and then the Danish, and he tells me about an old cemetery up the hill, but the old cerebrum isn’t ticking as smoothly as usual given that I’ve had about three hours of sleep since the night before, whenever that was. The journey from Iceland took three hours and crossed three time-zones, meaning we got to Greenland about 10 minutes after we left. I start walking up a staircase in the side of a hill that he said led to the cemetery when he calls me back. Not yet, gringo.

More discussion, mostly in English. Stay on the path, it’s a UNESCO heritage site. The expedition gets underway. It’s cloudy and plenty cold and every once in a while, it snows or the wind, which is at our backs, picks up. There are interesting photographs as the sun, low on the horizon, tries to muscle through the clouds, murky blue and yellow hues in the sky. But to get to those polaroid memories, I have to take off my thick winter gloves to work the camera. And in no time, the fingers start to freeze and then you just get the gloves back on and there’s another photo asking to be taken. Again, it is somewhere south of zero.

The snow is crunching, reverberating, underfoot. The tones modulate based on some hidden algorithm buried below. The Danish kid is whistling along on his sled. The pipsqueak in the backpack squawks every now and then.

The guide explains that the third wave of native people, the Thule, lived here as late as 1850, when they were lured away to the comforts of European living in Ilulissat, then going by its Danish name.

We march on, the slanting rays of sunlight strafing the landscape tipping down to the waterfront, where we cannot go. Have to stay on the boardwalk, which is buried under the snow, but it’s playing a part in the modality of our snow crunching boot bass line.

The guide is trying to explain the geology of the place. Some brain cells turn to permafrost. Not getting it, completely. Now that we’ve stopped walking, it’s getting colder. If that was possible.  The guide pours coffee and tea into plastic cups. He tosses one into the air and the coffee freezes in brown sleet before it even completes its arc. This is magic, he says.

One Reply to “Chapter 2 excerpt: Except for me and my Monkey”