Feb. 25. The crab could not be stopped. After a weak showing on Friday, the Cancer team rebounded with two impressive days on the medal stand and won the ZodiOlympics going away.

Cancer pulled in 10 medals each of the last two days of the winter games, ending the tournament with 74 total medals, nine more than second-place Aquarius. On a metal-weighted basis, the crab scored 150 points, 19 more than Taurus.

Cancer had the best men’s team, pulling in 39 medals, two more than Pisces. The fish men actually tied the crab boys on a medal-weighted basis. Cancer was among the top women’s teams, and it won the most medals in hockey. In addition, Cancer captured the most glory while wearing ice skates or skis on their feet, the two biggest event categories.

Sagittarius had the top women’s team, with 39 total medals, though they were one point behind in the medal-weighted scoring.

Virgo didn’t accomplish much, finishing 10th in medal count, but it placed in the middle of the pack on a weighted basis and it was also the most successful team in snowboard events. Aquarius were the top sledders with 11 medals in luge and bobsleigh.

Sagittarius won the most medals in curling, the only event in which competitors wore shoes.

Finally, Libra could not seal the deal. After fighting to a tie for 11th place coming down the home stretch, the scales captured just one medal on the final day of the ZodiOlympics, while Capricorn pranced ahead with eight medals. 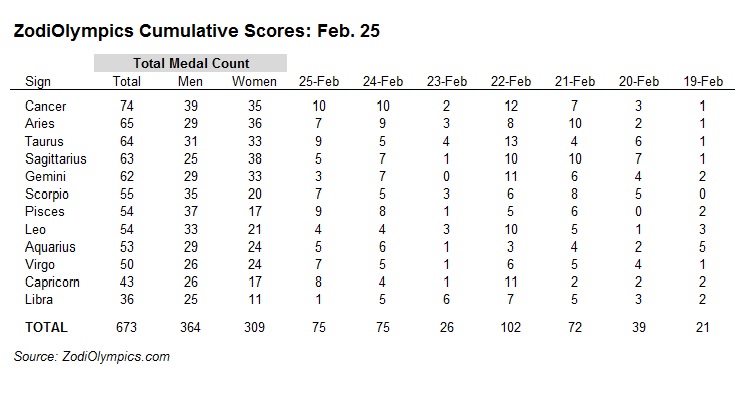