We gently placed Martine on the bow seat. There was nothing to really secure him there, so Lee put his employer’s hands on the gunwales and looked at me.

“That should work,” I said.

“I run with you,” he answered. I took this to mean that the former long-distance runner for the Democratic People’s Republic of Korea would more or less keep pace with us by running along the canal towpath.

But before he left, Lee lit a cigar and put it in Martine’s lips.

I grabbed the tow line at the bow and walked backward into the water, sliding the canoe down the gravel until it floated free. It was badly unbalanced until I clamored into the stern.

And so I began paddling upstream into the negligible current of the Delaware River, with the wasted, smoking shell of my friend Vic Martine uncertainly perched in the bow of our family’s canoe, north toward the mountains where men and mules had dug anthracite out of the rocks and shipped it downstream on the canal so genteel folks could light their parlors and heat their homes.

After a bit of paddling, I paused and reached fore, taking the joint from Martine’s face and indulged myself in a puff before throwing it into the river, thinking that I would spend my newfound inheritance in Intel Corp. to take Elizabeth on a long sea cruise aimed at true love. 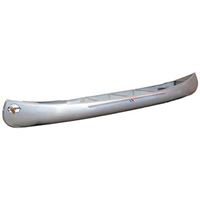