Izzy recreates an event from his youth: sneaking next door to put a bumper sticker on the neighbor’s car, a 1999 Ford Taurus.

But first, Henry outlines the plot of the musical he’s working on.

At dinner, Elizabeth and I asked Henry about the musical.

“We were working on Scene 4 today, the one where Ishmael is booted off the Rachel because the missionary discovers him with the missionary’s oldest daughter in a position that missionary daughters aren’t supposed to be in.”

I thought this was ironic, which must have been the point. “The missionary?”

“Yeah. The Rachel is taking a family of missionaries to a south Pacific island, but the oldest daughter falls in love with  Ishmael. But when the captain agrees to put Ishmael off the ship at the next port of call, the daughter sneaks away with him.”

The sinking of the Pequod might have been the best thing to happen to Ishmael, I thought to myself.

That night, after dinner was had and homework was attended to and my wifely administrations were concluded, I tried to keep myself awake until all the lights in Ted’s house darkened, but his Ramadan was taking too long. I set the alarm on my wristwatch for three in the morning and went to bed.

It was one of those sleeps with one level of consciousness keeping watch over my shoulder, waiting for the alarm to go. When it did, I knew right away why, and I don’t know whether I was ever asleep, or what sleep is if you’re not in a summer heat coma near the 16th green. I slid out of bed, pulled sweatpants and a tee shirt and padded into my son’s room, remembering a story we used to read to the kids, lying side-by-side in a child’s bed, embalmed by the warmth of infancy.

“What’s up, Dad?” Disorientated, but not particularly surprised.

“I got a mission for us. It’ll only take a minute.”

Henry was in pajamas. We headed down the staircase single-file and at the front door he asked what we were doing.

“I want to leave something for Ted’s car.”

It was balmy and wonderful outside in the pre-dawn. I had a magnetic bumper sticker in hand. We paused to study Ted’s house for a minute. No lights. There was the hush of a household making sawdust. I crouched down, for no goddamn reason, and crept to the back of Ted’s Taurus.

“Should I come along?” Henry asked.

I shushed him, index finger to lips, and waved him to follow me. But instead of crouching and creeping, he just walked to my side.

The Taurus was the biggest-selling car in the U.S. for several years, but by the time this model was dispatched in 1999, it was losing ground to the Toyota Camry, and sales depended mightily on fleet purchases by risk-averse, cost-conscious bureaucrats. Its rear end featured a burglar’s mask arrangement of lights and a roundness free of personality. By 2002, it had become a car’s ass that America was tired of looking at.

My magnetic bumper sticker would not stick to its plastic bumper so I made due with an uneven patch on the trunk.

Crawling still, I crept back toward our front door, the teenager in pajamas and bare feet walking along behind. 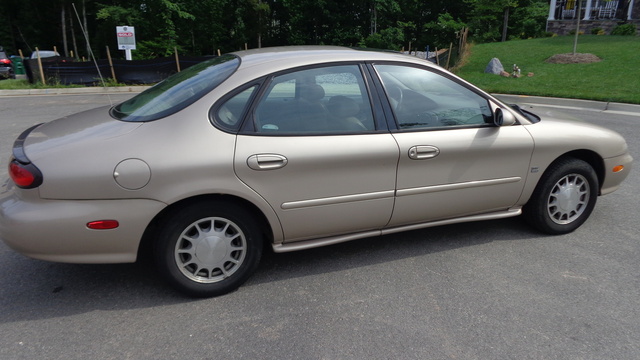