Taking his kid to an on-site filming session, Izzy gets into it with a BMW yuppie. BTW, I get spam on this blog from:

To the latter, today’s extensive post is dedicated. To the former, just send me whatever money you think I should be making at this.

Then, a couple of generations later, I was driving toward Old Town, a place in Alexandria that was heavy on brick and cobblestone, for the making of another video for the musical. Someone—I suspected Henry, but he denied responsibility—had outfitted me in clothing intended to resemble 19th century seafaring attire. Because there would be no place to change where we were shooting, I wore my costume en route.

With us were four girls from the cast, including Meredith, who was playing the role of a missionary’s daughter who is outbound on the Rachel when they pick up Ishmael. I wasn’t sure, but I thought there might be more than a thespian thing between them. Along with her three sisters, the missionary girls would sing onstage about the better life they left behind in America while a video of that better life played on the screen in the theater.

Or so it was explained to me.

My role was to amble around in the background, looking like I was about 150 years old. In the musical, the character played by Meredith was going to fall madly in love with Ishmael after he’s rescued from the sea.

The girls were chattering a mile a minute, a like-filled blur of something akin to the conversation of birds cooing on an overhead phone line. To pass the time, they rehearsed their onstage song, a parody of a 1960s girl-group ballad about boyfriends that made me think of Juliana. 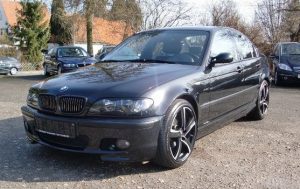 A blue-gray 2002 BWM 320i convertible was ahead of us in the boulevard. The top was down. The passenger, a young woman with carefully blonde hair and long, slender arms of tan, was smoking. The driver, sunglasses, pastel golf shirt, big watch on his wrist, was not.

The traffic was a wide, moving logjam, creeping through a gauntlet of side streets, parallel parkers and un-parkers, traffic lights and cars dodging around a Metrobus. The BMW was finless and mostly chrome-free. There was a small ornamental BMW badge in the middle of the back. It was a tidy, fancy box that symbolized the driver’s entry into the pampered classes. The 2002 model year was a huge seller, in the U.S. and globally.

A lot of people were knighted that year.

Then the princess casually dropped her cigarette into the road. Not a flick or pitch. Just an unconscious letting go that said, I’m done with this, let someone else pick it up. Or not.

I almost lost them at the next stoplight, which was a lot closer to red than yellow by the time I pushed through, an angry horn of protest in my wake from a car trying to exert its right-of-way from an intersecting street. Henry looked quickly over at me, usually the most boringly non-contentious driver on the road.

“She’s a flicker, son.” The most important thing was to stay close. Joan Jett came to mind, and I realized that I don’t give a damn about my reputation either.

The four girls in the back quieted down and tuned into the front seat of the minivan. A parent going off the rails. This could be amusing.

Next thing I knew, we were side by side, me in the left lane, the BMW in the right. I held my position even though the car in front of us was pulling away. BMW had to slow down for a right turn happening just in front of him.

“Hey, Daddy-O,” I called. The BMW driver was at least 20 years younger than me. When he glanced my way, I mimed the roll-down-your window signal, even though his windows (and his roof) were already down. He looked away, pretending he hadn’t seen my gesture.

“Your girl dropped a cigarette back there.”

A double take. He was trying to pay attention to the car in front of him. A car behind me barked: I held my ground.

“She threw her cigarette in the road,” I repeated.

I could feel the intense focus of high schoolers aft and starboard, unable to look away from a social shipwreck. It is written somewhere that minivans, especially when they are captained by middle-aged men dressed as ancient mariners, are not supposed to harass BMWs.

The BMW found clear space and zipped ahead. But my harpoon was in him. He had the jump on me, but I held on a few yards behind his left bumper, cutting off a lane change. We pulled alongside again; I was looking aft, careful of the traffic. I could feel Henry staring straight ahead, wishing perhaps that this wasn’t happening. Then the BMW suddenly turned right onto a side street, too quickly for me to follow. I caught a wave of intuition and zipped ahead into the right-lane space that he would have occupied, and sped toward the next intersection, hurriedly turned right and then made the next right, thinking I might catch him coming in the opposite direction.

It was a tree-lined residential street a block off the boulevard and the BMW was at my mercy, rolling straight toward us. I edged toward the middle of the street, which was narrow anyway because cars were parked on both sides. He probably could have squeezed through, but an entry-level luxury car paint job is a hard thing to sacrifice to a lunatic baby boomer dressed for serving fish and chips. In the battle of nuttiness, I had gained the upper hand.

Our slow-motion jousting match brought us closer together. As we came driver-to-driver, I held up my left hand peacefully. I stopped directly alongside him, and though he obviously didn’t want to, he stopped as well.

“Hey, man. I just want to know why the first mate dropped her cigarette in the road.”

The pretty young woman was looking furiously straight ahead, and she turned once to glare at me in utter disgust, as though there ought to have been somebody around in a position of authority to deal with me.

The BMW driver was stuck. “Well, uhh, you know. People just do things.”

“This is research. For science.” The science card can be powerful. I nodded sideways toward Henry. “We don’t care what your names are, and we’re not taking license numbers. We’ve heard all kinds of explanations. Is that your answer then, ‘people just do things’?”

The young woman was fuming. “Yeah,” she said, louder and getting her fur up. “People just do things. And what’s up with that stupid hat?”

Unconsciously, I looked up as though I could see the black tri-corner on my head. “We’re theater people,” I said, shrugging my shoulders. “Have a good day.”

And then, we captains each steered our vessels through the narrow channel between cars docked to the curb.

“What was that?” asked Meredith from the middle row of the mini-van.

“It’s a research project I started with my dad a long time ago,” I said and clasped eyes with her the way people do in rearview mirrors. She had a distant look as though she was trying to imagine how someone as old as me could have a father and an existence in the blurry, sepia-toned long-ago. Maybe my old-timey seafarer hat helped her orient herself between my father’s time and the present.

I didn’t think any of them would have believed me if I said he gave his life for this project.

That afternoon we filmed at a couple of locations in historic-looking spots in Alexandria. After we dropped off the girls, Henry informed me that the logs of whaling ventures recorded isolated cases in which women, disguised as men, joined the forecastle crew of whalers. “It wasn’t common, for sure,” he said. “Whaling masters sometimes took their wives with them, or took wives from the islands.”

Historical context was important to him.

“Life was very hard before the mast of a whaler,” he said. “It would have been a desperate choice for a woman to make.”