A lot goes on in this chapter. But at the end, Izzy and Speedy follow a 1952 Chevy Deluxe into one of Bucks County’s covered bridges.

We were behind a two-tone 1952 Chevy Deluxe, by then a fuddy-duddy in the social order of the road, round and from the glory years of the Baroque period, finned, and imagining itself to be aircraft. The view from behind was a solid chrome bumper that seemed too close to the road and an oversized bubble trunk that rose with self-importance and big enough to hold a small pony, with smooth wings on each side that bowed in deference to the mighty trunk. The rear wings finished off wheel covers that were completely separate from the raised panel that started at the back door and grew into a massive sidewall, capped with the front headlight. The hood over the engine was its own time-worn Appalachian hilltop, presiding over an overdone constellation of chrome. The windshield was in two pieces, with a chrome bar joining them together.

An older, dark-skinned man with a felt hat was driving, calmly smoking an unfiltered cigarette in his left hand. He was an ash tapper, hence, a possible buttflicker. We stalked him from a polite distance, but close enough that no other traffic could get in the way. Soon, we were off the bearing for home. 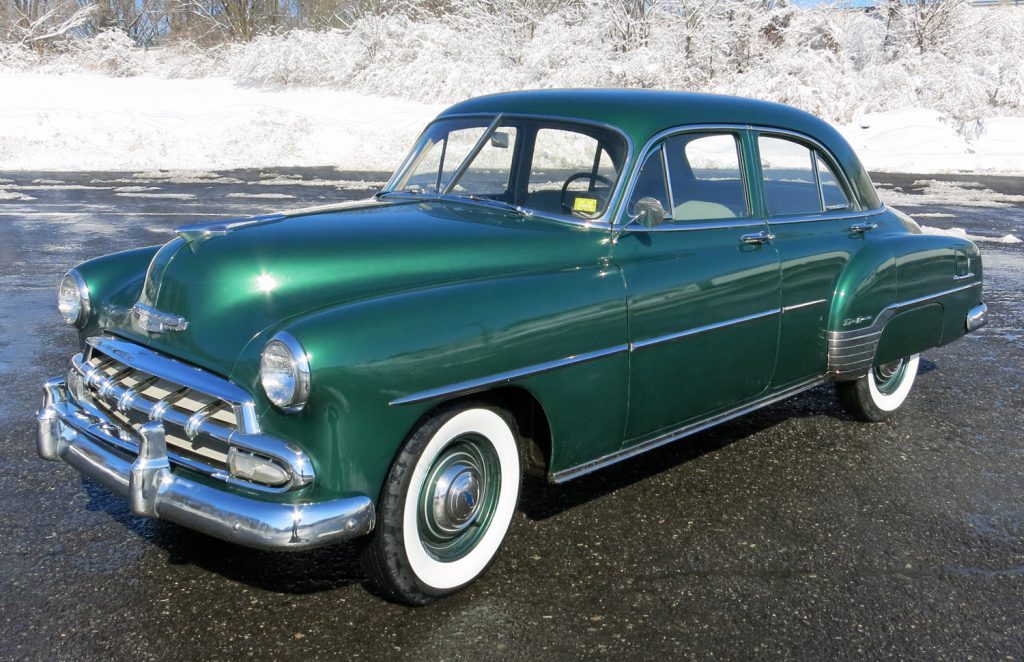 The Chevy approached a covered wooden bridge and edged to the shoulder of the road to wait for an oncoming car to come through. Just as he was entering the bridge, his right hand came up, waving as though he was trying to shoo a bug, and then his left hand got involved and he must have dropped the cigarette because he bolted up in his seat and the next thing we knew he was pitching the cigarette butt out the window like it was a grenade. He pulled onto the one-lane bridge and we slid up the entry to wait until he cleared to the other side.

The bridge spanned a narrow creek. As the Chevy Deluxe crawled forward into the sunlight, we eased into the wooden tunnel, sun splintering through the cracks between the boards of the bridge, glimpsing the summer-dry creek below, and then we too rolled out into the sun.

We followed him up a narrow road that climbed a steep hill and through a gap in the ridge. He turned onto an even smaller road that seemed almost abandoned, and I wondered whether my father would follow him down the rabbit hole. I had covered most of the country roads I could get to by bike or foot, but I didn’t recognize this one. That’s about all it took for me to stop feeling sorry for myself about Juliana.

My father stayed a nine iron behind the Chevy. At first there didn’t seem to be any reason for this road to be, no farm fields or driveways or buildings at all, but of course there is always a purpose and, some believe, a reason. On my side, there were unruly trees posted with no trespassing signs and contained by a half-hearted barbwire fence. My father’s side of the road was fenced as well, but there was more open space, and as we turned a corner in the road the Chevy was waiting for us, pointed back in our direction.

There was just enough room for us to squeeze by and he was studying us as my father rolled to a stop, driver to driver, so close that neither of them could have opened his door.

“Evening,” my father said, nodding. The Chevy driver was unmoved.

“I noticed you tossed a cigarette out of your car back there at the bridge.”

The Chevy driver’s eyes narrowed. “Are you following me or something? This is private property back up here, and you don’t look like you know the territory.”

“Well, yes, we did follow you here, for science. We’re studying people. We don’t care much about property.”

This wasn’t scoring any points with the Chevy driver, who showed no intention of pulling forward. An uncomfortable, anxious moment.

“Do you remember throwing the cigarette in the road back there by the bridge?”

“Maybe, but I don’t see it’s any business of yours.”

“It looked like maybe you were swatting at a bee.”

“I don’t like to smoke in them bridges. I can handle the flies all right.”

“But why throw it out in the road?”

“Listen, mister, that’s just the way it went down. I told you, I don’t like to smoke in them bridges. That’s all old timber been soaking up oil and fumes for a long, long time.” He was warming up a little.

“I appreciate your time,” my father said. “You’ve been very helpful. I’ve got something for you for helping us out.” He reached around to the back seat and picked up his roll of masking tape and thick black marker. “It’s for your car,” he said, tearing off a piece of tape and writing I FLICK BUTTS on it and handing it across the short distance between us.

The Chevy driver studied the strip of masking tape for a minute and handed it back. “I don’t think so,” he said, glaring at us. “Now if you’re done wasting my time, I gotta be somewheres.”

The problem with this arrangement is that we were both pointed in the wrong direction, with only inches to spare between our gunwales. We inched ahead—Speedy was studying his outside mirror closely—and then around the curve in the road we saw a driveway. Beyond that, the road twisted on farther into the woods. We turned ourselves around in the drive and started back out.

The Chevy was backing up toward us and, again, we edged past each other carefully; now I was face-to-face with him and I nodded, wishing we had left him alone. After we squeezed past each other, I looked in my outside mirror and saw him pull into the driveway. I noticed my father was watching him as well.

In the research journal I wrote “Historic preservation” as the reason for his cigarette toss. Then I added: “May have been bee-induced.”