AutoFlickers: This post is a day late. Got back from Iceland last night and was too pooped to blog. Now that’s a bumper sticker!

A blazing hot day at the country club. Izzy falls asleep on the job. Afterwards, he gets a ride home with his mother. They spy a woman tossing a cigarette from a 1965 Buick Riviera. 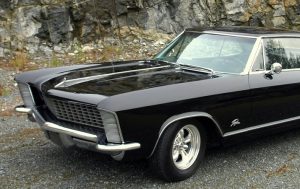 I came to a fairway trap that was rarely in play on the 16th hole and settled into a patch of faint shade from a tree 20 yards away. I dreamed that Juliana and my father were dancing together. I was glad when I realized, still dreaming, that this was a dream.

My unintended nap boiled away. I sat up and drained my water jug and looked at the sand pit carved into the Pennsylvania countryside. Sitting with my arms around my knees, I could smell my sneakers.

I waved and pointed to the ball. In my career as a golf course worker, many shots had landed around me, but I was never struck by one. On the greens-keeping crew, we could never tell when incoming were on the way—we didn’t get the same courtesy, the pointless “Fore!” that golfers sometimes yell to each other. The caddy fared a little better in that his attention was at least focused on the golfers, rather than the grass.

I trudged light-headed on to the next sand trap. I stood beside it, staring into the harsh white sand, searching for weeds. There were none. I had apparently dozed myself into a perfected universe.