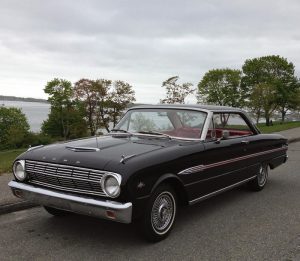 A strange meeting with Juliana at the diner where she works. Martine asks the two teenagers if they want to work at a party he’s having at his house.

Later, Izzy and Speedy see a cigarette pitched from a 1963 Ford Falcon.

I walked past the last traffic light on the street that merged into the road that led home, and pivoted to face the oncoming traffic. It was a good, wide, graveled shoulder that I knew well—an easy place for the drivers to pull over. Sitting at the light, they had plenty of time to decide whether they wanted to give me a ride. Or not to.

The doubting hitchhiker, perhaps lacking confidence in his thumb-bait or skeptical of the generosity of strangers, hedges his bet by walking backward, thumbing all the while. The hitchhiker who has given up all hope turns and marches toward his destination, offering his left thumb in a backhand hitch. This is a self-defeating strategy: if they can’t see your face, it is too easy to ignore you.

But the hitchhiker in a state of grace stands his ground, faces the traffic, smiles confidently into the windshields of the oncoming traffic, picks out his mark and gently jerks his thumb like a trout fisherman. He is confident and disinterested, accepting the fact that most drivers will not stop but religiously sure that one will.

I didn’t see him in the line of cars waiting at the traffic light. He found me first and steered onto the shoulder, leaving a clear route for the rest of the traffic to go past and within a few feet of where I was standing.

“Where are you going?” he asked.

Speedy was in a good mood. He had been to see Dr. Matthews that day, and came home aloft on the notion that his brother was getting the best care available. “I think he’s gonna get better; I think he already is getting better,” he said, gripping the steering wheel enthusiastically.

We rolled back onto the thoroughfare, slipping in behind a black 1963 Ford Falcon. It was a modern, compact car in its day, sleek and flat. “Futura” was written across the back of the trunk, with an emblem above and a slash of red-bordered chrome beneath, speared in the middle by a circle. Wings on either side pointed out, rather than up, curling over the round red taillights. The bumper below curved sympathetically, framing the taillights like burning rocket exhausts.

It was no jet car. It looked a little like a layer cake.

The driver was smoking, and we motored past our turn to stay on his trail. He looked to be in his mid-20s, a plain khaki work shirt, a working-class hero. I could see a chunk of his face in his rearview mirror; he held the cigarette in his lips for what seemed like a long time and then took a long draw and threw the butt out the window with conviction.

As whalers hath before us, we lowered for him.