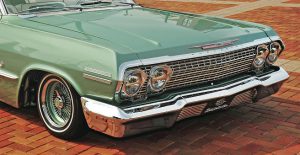 Driving home from work, Izzy and Speedy come across a woman driving a 1963 Chevy Impala. She tosses her cigarette. When asked to explain why, she tells Izzy he’s too young to smoke.

“A lot of people don’t know why they do things,” my father said. “Maybe what they need is a reminder,” he said.

At home that night, Izzy tunes into the Jean Sheppard radio show.

That night, after dinner, after talking to Juliana for a while on the phone, I sat out on one of the webbed lawn chairs feeling a thunderstorm gather in the sky. I had a plastic transistor radio, tuned to the very narrow groove in the dial that opened a portal in the radio spectrum all the way to Jean Shepherd on WOR in New York City.

Shepherd opened his show that night with strange music playing in the background as he read two poems by T.S. Eliot. There was thunder rumbling in the distance and I had the feeling you get when something is following you in the gloaming woods, a sense so tangible that the hairs stand up on the back of your neck. I wondered if he could feel the same storm system in his radio studio.

And then Shepherd read Elizabeth Bishop’s “The Fish,” whose “skin hung in strips like ancient wallpaper.” There were already hooks in the fish’s lip, signs of wisdom, so the poet let it go.

And then another piece by the same poet, about sailors steering around soulful icebergs as clouds warm overhead.

The background music, Shepherd explained, was from the film 2001: A Space Odyssey. At the time I thought 2001 was impossibly far  off in the future, well beyond the current horizon filled with ships and icebergs.