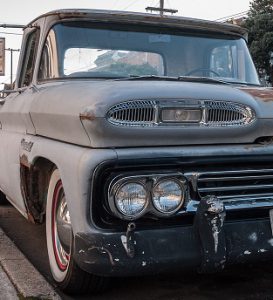 Izzy and Speedy confront a butt-flicker in a 1960 Chevrolet Apache on their way to work. It doesn’t go well.

After work, Izzy goes to New Hope to find the guy who sells icons made of coconuts to tourists. He is led to Quentin’s studio in a boarding house.

It was a single room with a huge window as its centerpiece, six feet wide by four feet high, a matrix of small panes; it was hinged at the top and opened into the room and hooked to the ceiling. It looked out over a quiet stretch of a nearly waterless stream trickling through the heart of the town, surrounded by sycamores broken out with psoriasis and the miscellany that grows on the banks of pebbly streams in Pennsylvania. The window made the room seem nautical, as though it was a captain’s berth at the stern of a 19th-century ship.

Quentin explains that his coconut icons are intended to honor the people who worked shipping coal by barge on the Delaware Canal.

“You don have to be some gawd or saint fo your work to be worth rememberin’. Every soul worth that,” he said, waving his arm across the room. “These are icons of those people, dem boys who drove the mules along the towpath 13 hours a day while cap’n steered de barge, dem lock masters who lowered em down and raised em up, and them boat builders and storekeepers who kept the canals working long past their natural time. The miners dug that anthracitey out them damn mountains, and diggin coal is nasty work but not as nasty as butchering whales and cook him down on a boat tossing out on de ocean.

“Them canal men floated it down to folk’s parlors and if you ask me they had de best of it, spite of all their troubles.”

I asked him what troubles they had, but he said he had to get out on the street with his icons, as the foot traffic was picking up.

I took a couple of photos of Quentin and his workshop.

“You gots to peddle coconuts when their pockets still have some monies,” he said, as I traipsed along behind him.