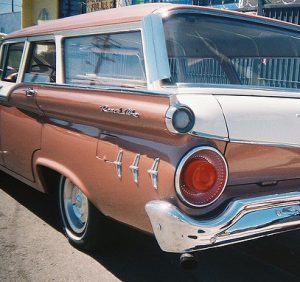 Hitch-hiking home from work, Izzy gets a ride with girl from his high school who is driving her family’s 1959 Ford Fairlane Ranch Wagon. She throws her cigarette out the window as she rushes to make room for him in the front seat. It turns out better than he might have expected.

The Ohio Express was coming on the radio, ready to launch into its tribute to yummy. I was aware, even as a Boy Scout, that this was bubblegum. Yet Juliana was drumming her fingers and began to sing along. I did not understand the lyrics or what it means to have love in the tummy, and I began to fear that the moment we were having was fluttering away, like something written on a tiny slip of paper sucked out the window and blown down the highway behind us.

Juliana glanced at me, grinning and singing, completely at ease in herself. I wished I had paid more attention to this sugary concoction the first 600 times I heard it on the radio. I think I summoned up a grimace that looked only slightly constipated. Her eyes lingered on my face, road kill in the merciless rat race of courtship, and then she turned back to the road.

A form lumped up in my throat. I was suddenly aware of the scent of golf-course fertilizer and dried sweat. And pretty sure it wasn’t coming from her.

No more cavalier banter. I was almost thankful that we were coming up to the turn-off to my house. At this point in a hitched ride, I would get out and walk the rest of the way unless I happened to get picked up by another inmate from our particular suburban cellblock. Where we lived, there were only two auto-accessible outlets to the rest of the world, and the other one was a less-traveled country road that connected only to more of its kind. I didn’t know where Juliana lived, but I knew it wasn’t back up in my neck of the woods.

Here is the wonderful, beautiful thing about being just one person and not everyone in the universe. You can lead yourself down a dismal, self-loathing path to utter desperation and the person you’re sitting next to is still back there where you left her, sweeter than sugar, her tummy overflowed with yummy, and never having let you go.