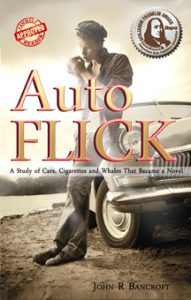 The design team at Ecphora Press has been hard at work on a new cover for AutoFlick. The impetus came from a discussion I had with someone who has a lot more experience in the book business than I do. Our conversation took place at the IBPA publishing conference back in April.

Her point was that the classic cars make up a lot of the “scenery” in AutoFlick, and that ought to be the theme of the cover. Back when I was designing the original cover, I thought first of doing something with cars. But I’m no artist, or designer. All of my ideas were way beyond my skill set.

Then I stumbled on the idea of the Boy Scout shirt and the ocean, which reflect important aspects of the story of the novel. I bought a vintage adult BS shirt from the 60s on e-bay, and left it outside on the patio for the summer to “season” it. I shopped on e-bay for BS merit badges and learned that this is a whole market unto itself and the badges were often redesigned over the decades even if the skill (canoeing, etc.) was the same. I shopped e-bay for other badges, buttons and so forth. One of my favorites is a button that was given out at the 1968 Poor People’s Campaign, an event that’s featured in the novel.

Then I sewed them all on the shirt and photographed it at various watery places: a lake a few miles away, the scrawny river in the woods behind our house, my vacation to the Pacific Northwest. Finally, I was in San Diego on business and went out to a beach and took the shot that ended up being the first cover.

So the new cover is coming and will be better. A real artist/designer is doing it. The Boy Scout shirt can go back to being a Halloween costume or cocktail-party conversation piece.

The funny thing, though, is that most of the critics who reviewed AutoFlick for the Ben Franklin Awards this year said they liked the old cover — average score was 8 of 10. One person, who didn’t like anything about AutoFlick, said the shirt didn’t have anything to do with the book. I’m assuming he/she actually read the book, but I’m less sure she/he sure looked closely at the cover.