The pilgrims toured the still, shuttered school, but David the whole time was thinking about the secluded burial ground. He had not been back there since the debacle with Hendrik and the hitchhikers. He was drawn to it, even though he knew the others would follow him. He paused at the historical marker outside the cemetery, aware of the pilgrims behind him. Finn started to open the cemetery gate.

“We don’t want to go in there,” David said, holding it shut. He would not make the same mistake twice.

“It doesn’t say we can’t go in,” Roslyn pointed out.

“This is close enough.” David stood guard at the gate. “Some of these people were born before the intruders arrived and lived to see a way of life vanish. They didn’t have a word for wilderness.”

“Now I remember,” Hendrik said. “You had some kind of out-of-body experience here when you were a kid.”

David was surprised Hendrik remembered that much. “An old man was being buried. His astral body was still here, and I was aware of his spirit friends as he journeyed toward them.” He turned, noticing ant mounds scattered among the tombstones, grasses, sagebrush, greasewood. “I never met him while he was alive.”

David handed the car keys to Hendrik and pointed down the access road to the prison.

“We should go see if their dad is still there,” he said. 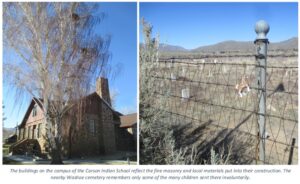