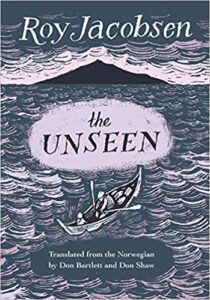 The deeper you go in this, the better it gets. Translated from Norwegian, The Unseen was shortlisted for the Man Booker International Prize in 2017. The story is set on Barroy, an isolated island off the coast of Norway populated by one small family early in the 20th century.

It’s a remarkable portrait of a small group of people living close to the land and sea. The family scrapes every useful resource they can from their rocky home. With one eye on the future, they make incremental improvements, sometimes creating infrastructure with no immediate use.

When Hans rediscovers an old telescope, he sets it up to look at the larger island, barely visible to the naked eye across the open sea. He finds features of the town that he’s familiar with but cannot see its harbor, which lies below the horizon. The curtains in houses make him uncomfortable. He backs away. Hans and his father agree they don’t need the telescope, which is likely why he never played with it as a boy.

Jacobsen rolls you along in the story, even if it takes a while to get the hang of how the pieces fit together, at least for me. Sentences end unexpectedly with an image or idea you didn’t see coming. Hans has been clearing a nearby empty islet to expand the family’s farming, but he realizes he is a fisherman at heart. Jacobsen writes: “What was once intended to be no more than a slightly extravagant extra piece of land is in the process of becoming an existential abscess.”

And one of the strongest style points is the peculiar dialect the islanders speak. The translated narratorial voice is straight-forward, albeit with many artful constructions. But the dialog – there’s not a lot of it – is something else, almost a secret language.

“Hvur lovely tha hair is,” Maria says of her daughter, Ingrid, who will gradually become the family’s leader. Even with context, I wasn’t always sure whether “hvafor” meant “however for” or “why.” Wait. Is that how contemporary Norwegians speak English? Kudos go to the translation team, Don Bartlett and Don Shaw.

The Unseen is a great read, not an easy one, but worthwhile. And it’s not too long.