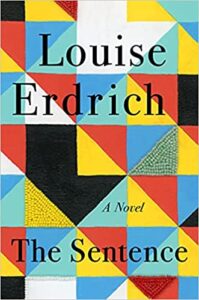 A ghost leads a modern Native American woman to find herself.

Don’t get too comfortable with this, because it’s going to change. It’s going to start someplace, go where you don’t expect, come back and find another new turn and when you think you’ve got a handle on it, the pandemic arrives. Could it be less twisty, more straightforward? Maybe, but Erdrich’s prose is so entertaining you don’t mind getting led along.

It reads naturally, like this was a year or so in the life of a real person, not a highly scripted novel.

Lots of good bits, amazing bits, really. There’s a very satisfying scene where the protagonist dons blue rubber gloves for some kitchen-sink scrubbing. This arouses her husband. Light comedic banter. A nice turn when they later discuss whether the gloves should come off.

This is a first-person narrative by a modern Minnesota Native American raised under troubling conditions in the city. She is duped into committing a crime that sentences her to a long prison term. It is just the first sentence of significance in the story and gives her enough time to discover reading. Books. Another novel about books. She ends up working in a bookstore. Nearly all the major characters are Native Americans from Minnesota, as is Erdrich. Who also owns a bookstore there.

It’s interesting enough to walk in their shoes, to see modern life – right through voting day 2020 – to get a glimpse of their lives. It is flat-out wonderful to witness, second-hand, the preservation of culture. Among other things, you get to relive the George Floyd experience through the lens of contemporary Native Americans. Which raises issues for the protagonist about her past and her marriage.

A few little things. I sometimes drifted off when the story dove into detailed descriptions of scenes that don’t seem so important. The novel is all first-person narrative until three-quarters of the way through, when she switches briefly to third-person. It didn’t seem necessary to me. Found a typo on page 207. And two instance of the phrase “try and [verb]” instead of “try to [verb].” One of the peeves I nourish.

One of the best books I’ve read in 2022, right up there with The Lincoln Highway, maybe a little more demanding but worth the effort.