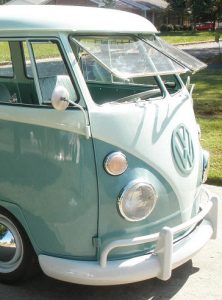 Riding home with his mother from work, Izzy spots a butt-flick from a 1964 Volkswagon bus. In Thailand, the air force was dropping flowers and popcorn from airplanes to celebrate the adoption of a new national constitution. When they get home, Speedy is excited about a constitutional argument about the legal standing of trees.

My father was excited because a justice of the U.S. Supreme Court, a Minnesotan named William O. Douglas, was there to support the protesters.

“Justice Douglas said that trees and paths and waterways should have the same legal protection that people and corporations have,” my father told us over our hamburgers and salad as the sun began to set. “He said the environment and all its parts should have standing to bring lawsuits in court. It was the damnedest thing I ever heard.”

I was trying to picture trees in a courtroom.

“When I was a kid, we used to go fishing over there and no one gave much thought to the barges on the canal. And then one year, they weren’t there. It was funny to have this big-shot Supreme Court justice and his newsmen and photographers and FBI spies making so much noise about preservation.

“Nobody can bring the barges back,” he said.

Then something came to his mind. “I started to interview this guy who didn’t seem like one of the protesters—his shoes just weren’t right—and he started to tell me why he was there and then stopped. He asked me if I was undercover, which is the most bizarre thing anyone has ever asked me.

“I told him I worked for the paper, and he thought about it for a moment and said he didn’t have anything to tell me.”