Feb. 21. Gemini, Cancer and Sagittarius continued to dominate the ZodiOlympics ranking of top astrological teams at the PyeongChang winter games during a busy day of team medals.

A whopping 72 medals were awarded on Wednesday, including 23 distributed to the bronze-winning women’s hockey team. That was the biggest one-day medal haul since the 64 given out on Feb. 12, when team figure skating awards were made.

Gemini, with six goals earned, remained at the top of the standing in medal count, one ahead of Sagittarius (which moved up from fourth on Tuesday) and Cancer. But the crab clawed its way to the top of the medal-weighted ranking with 81 points. Cancer hauled in nine gold and six silver. 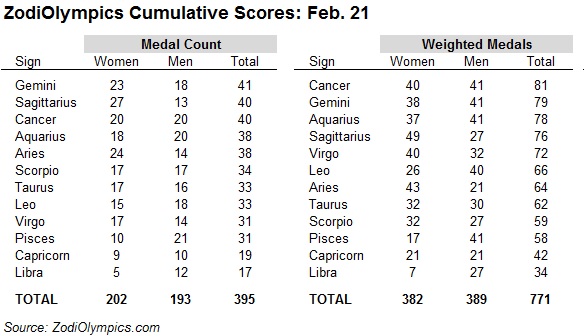