The Beltway Sniper attacks begin. Late in the day, Izzy and Henry follow an elderly woman driving a 1939 Plymouth.

On the morning commute, the world tilted further toward the bizarre. By the time I delivered Henry to school, a landscaper had been shot while mowing grass at a car dealership somewhere else in suburban Maryland.

I was downtown counting cars along a street that might someday get speed bumps when a motorist waiting in traffic told me there had been another killing, a taxi driver filling his gas tank. And before this news had been fully digested, a pedestrian asked me if I felt safe working outside.

“He shot another one, a woman sitting on a bench at a bus stop,” the pedestrian said. “She was reading a book.”

“Though of real knowledge there be little, yet of books there are a plenty,” I suggested.

It was creepy on the street, and I began looking for rifles in the back seats of the cars that swam by.

At the end of the day, I took refuge in the darkness of the theater at Henry’s school, checking on the show’s progress. They were rehearsing a scene in which Ishmael, on Queequeg’s home island, realizes that all westerners—missionaries, whalemen, merchants, himself—are destroying paradise. In the musical, Ishmael decides to go back to whaling. Idly, I wondered if there was some way I could move onto the houseboat.

On the way home, news of another sniper killing, a young woman shot while vacuuming her minivan at a gas station. The radio said the public schools were in lockdown. It was unsettling, to say the least.

Henry and I came upon a 1939 Plymouth coupe convertible. The driver—an elderly woman who could have started her driving career in that car—was lighting a cigarette with the window rolled down. She drove very, very slowly through the residential streets near where my son went to school. She and her car looked as though they had been sailing those streets together for decades, through the tail end of the Depression, the gas-starved war years, the buoyant can-do fifties, the getting-our-act-together sixties, the excellent dance moves of the seventies, the cashing-in of the eighties, the numbing glide into the nineties and now the little old lady from the Northwest quadrant and her rocking black Plymouth convertible were drifting along the leafy streets, oblivious to the snipers and the weapons of mass destruction and anthrax in the mail. 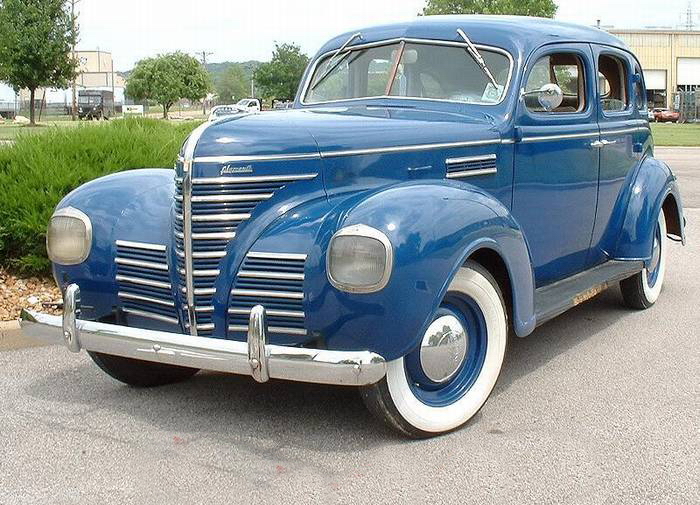