That’s not a typo. The AutoFlick story has shifted to 2002. Izzy is now himself a father, driving his son Henry to a school-related activity on Labor Day weekend. An interlude with a 1996 Honda Civic convinces him to restart the butt-flicking study that has been dormant for 34 years.

It sometimes seemed far-fetched that Henry and I were related at all, and yet I was there at his conception and his birth. He was the one of my three children who was most Yardley and yet the least like me.

At Henry’s age, I was pushing a lawnmower all day, ruminating in the droning of a two-stroke engine, watching long grass become short grass. Henry spent the summer before his last year in high school working with dozens of classmates planning, writing, and preparing to stage a musical.

He was full of talents and wonderfully skilled at working with others. When I was turning 17, I was a good walker who could barely play a radio. In 34 years, I had deftly managed my career to a point where I was the number two in a two-man consulting firm that did traffic studies for small governments.

Our minivan had served my wife for 10 years of family duty and in semi-retirement had become our cargo vehicle. Its air conditioning stopped cooling sometime in Clinton’s first term, the right-hand outside mirror was held in place with duct tape, and there was a perilous fault line in the windshield. The radio still worked; mysteriously; however, it only seemed to play songs that I didn’t know.

Henry did not drive. He was old enough and capable enough, but he was taking a stand on what he called the petro-global jihad against the planet. When he was 14, he made an iron-on tee shirt that said: Fuck the PGJ. They say it skips a generation, like baldness. 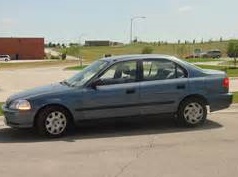 We lived in Maryland, where I ended up when I couldn’t stay in Pennsylvania any longer. That Labor Day, Henry and I had driven almost free of the Washington urban core and were navigating the interconnected lagoons of subdivisions when a red 1996 Honda Civic zipped past us, passing in a no-passing lane on a two-lane country road crowned in the middle. As the Civic squeezed in front of us, the driver flicked a cigarette into the road. And triggered a genetic response in me.

Without any warning, I wanted to get to the bottom of it. I revved the menopausal minivan, pushing it to keep pace with the Honda, and we were soon going fast (for me), and Henry was looking at my profile probably wondering why the telephone poles on the other side of the road were galloping past us with such uncharacteristic speed.

I think I might have been gripping the steering wheel tightly. In my heart, I knew we would not keep up with the Honda unless there was divine intervention.

We rounded a bend in the road. The traffic stopped suddenly. Road construction. Only one lane of traffic getting through. It was our turn to give right-of-way to the traffic coming at us from the other direction.

There was a fellow in an orange vest holding a stop/slow sign in synch with his partner at the other end of the construction zone. This was more than familiar to me; it was part of me. After I went to college, I spent some time working for the highway department, chaperoning traffic through roadwork zones.

“Dick Cheney says the risks of inaction are far greater than the risk of action,” I said aloud to myself.

“I’ll be right back,” I told Henry, and shoved the minivan into park—it sighed when I did that—and I unbuckled my seat belt and got out of the car. Carried ahead by tailwinds from the past, I marched determinedly to the driver’s side of the Honda. A monument to plastic, bereft of chrome, a large, molded bumper designed to self-destruct at 10 miles-per-hour of impact, tinted windows, rear light epaulettes integrated silently into the smooth, boxy contour of the body. It was the hatchback, a small prairie of black glass under a little brim. Car design had leapt ahead generations since the last recorded autoflicker to discover the “box.”

The Honda was throbbing a hip-hoppy salsa beat. Two thick-necked men sat in the front buckets. They were nearly as surprised as I was to find myself there, walking around in an auto zone.

“Excuse me,” I said. “I noticed you threw a cigarette from your window as you were passing me back there.” I was trying to echo my father’s tightrope act over the chasm between neighborly civility and intrusion.

The driver looked up at me without any sign of comprehension.

“I’m an anthropologist,” I said, wondering what it would be like if that were true. “Working on a research project. Can you tell me why you threw the cigarette out the window?”

“Not speak English,” he said.

As far as I could remember at that moment, this was a unique response.

“Okay, well,” I said, and turned back to our car, muttering, “See, this can be a rational thing that nobody needs to get upset about it.”

Henry stared at me as I slid behind the steering wheel. “Write this down someplace before I forget,” I told him. “When asked why he threw his cigarette out the window, the subject responded that he did not speak English, though I think he spoke at least a little bit. I believe that is a 1999 Honda Accord.”