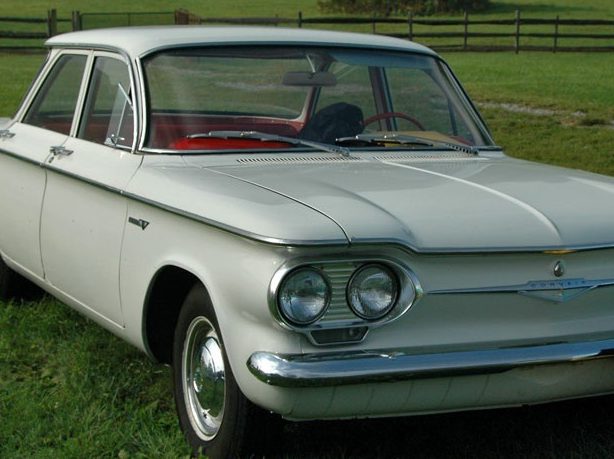 Ah, the Chevy Corvair, spotted in the parking lot of a strip shopping center.

We pulled out of the strip mall lot and fell in behind a bright green 1964 Chevrolet Corvair, a car-of-the-year pick when it was introduced as the first American-made rear-engine car in 1960. Although it would later incur the wrath of Ralph Nader, the Corvair influenced car design by ending once and for all the obsession with wings, and introducing the flow-line design using convex surfaces. At the time, it was an oddity, flat, low and wide with air vents in the hood over the engine in the back. The back of the car wore a lid.

The trunk was in the front!

The 1964 was the last model year Chevy offered the Corvair with a gasoline-powered heater. It looked more American than the VW Beetle, against which it was competing, but there were few in the school parking lot. It was the flying saucer your weird uncle—the one who was a ham radio operator—drove and bragged about.

This one had a bumper sticker that read: Waiter! What Is This Nitwit Doing in My Soup?

The Corvair lurched a little bit at the start, the sign of a manual transmission. I was thinking about my father before I noticed that Mr. Corvair was also working on a cigarette. We were following him out of a red light recently turned green when he quickly threw the cigarette out into the street with his left hand, and then grabbed the steering wheel.

“He had to litter because he was shifting gears,” I said.