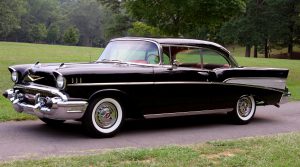 On a date with Juliana, Izzy first stops by his last Boy Scout meeting.  Afterword, they half-heartedly pursue a 1957 Chevrolet Bel Air.

We pulled up at a four-way stop sign, and a ’57 Chevy Bel Air arriving at almost the same time paused only briefly and then shot across our bow through the intersection. There were teenagers inside and they were smoking.

The people in my life were getting used to this, and Juliana didn’t even blink. We turned to follow the Chevy, a heavy, boxy carriage with modestly long skirts and an abrupt windshield that wrapped slightly around the sides of the front cabin. Its distinctive forehead leaned slightly into the wind, and a flat, jet-plane hood ornament steered it streaking down the road ahead.

The ‘57 Bel Air was a popular car for teenagers, reliable and roomy and of an age that middle-class dads no longer saw as suitable for the family car.

A passenger flicked his cigarette, a dramatic fling into a cornfield that may have sailed several rows deep.

We followed the Bel Air a little ways, but our hearts were elsewhere. We gave up and headed down a dark farm lane tucked between a cornfield and a line of trees, where we worked on the merit badge in French kissing, an unexpectedly easy one to earn.