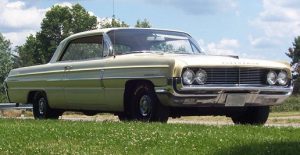 A 1962 Olds 88 passes at high speed and flicks a cigarette to the road. Speedy tries to catch up but loses him. Then he gets the idea of marking cars that have already been cited in the study of people who flick cigarettes from automobiles.

“At some point we may find the same car or the same driver in our sample,” Speedy said. “Maybe we should mark them, the way biologists tag species in the wild for study.”

In the National Geographic, the savannah science guys always shot the wildlife with tranquilizers before they stapled tags in their ears. I wondered if this is what my father had in mind.

“It can’t be permanent—we don’t want to tamper with the evidence—and we may have to tag them without their knowing.” I was used to the fact that my father often thought out loud.

“You mean put a mark on the car, right?” I said, trying to lead the witness.

I should have stepped in there with something to change our bearing, but I came up empty.

“Or something else,” my father said, “like a bumper sticker.”

I was afraid to ask.

“I flick butts.” Speedy seemed pleased with this.

“I guess that would show them,” I said.